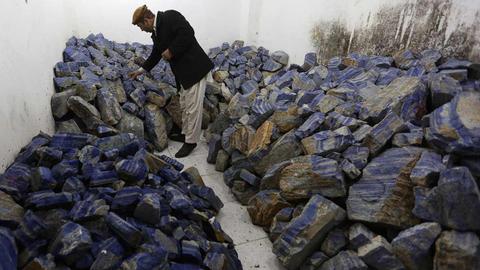 With increasing global demand for rare earth minerals and lithium driving advanced technology, Afghanistan is at the forefront of economic speculation given its famous mineral reserves. In reality, it is not that simple.

Afghanistan is gaining visibility with the public for its considerable mineral wealth. The country is located on the Tethysian Metallogenic Belt (TMB) that stretches from Europe to Turkey, Afghanistan and Iran, considered by geologists to be one of the highest concentrations of metals and minerals in the world.

Most estimates suggest Afghanistan is home to at least $ 1 trillion in mineral reserves, including what could potentially be the world’s largest source of lithium reserves. The figure is questionable, however. On the one hand, the valuation took place in 2010 at the end of a very successful global commodity cycle.

Other estimates also vary widely. In 2010, a former Minister of Mines valued Afghanistan’s mineral wealth at nearly $ 3 trillion. If the figure is correct, it could potentially be worth more after the global economy recovers.

This is fine on paper, but little is said about the difficulty of extracting said resources. This is because most of the estimates are based on geological studies carried out in the 1980s by the Russians. That’s not to say they aren’t accurate, but modern surveying techniques have come a long way in 40 years.

Afghanistan has seen multiple efforts to extract its resources through several rounds of government tenders, including a major bid from banker JP Morgan Ian Hannam. Most were interrupted due to security conditions.

In 2018, the state-controlled Chinese metallurgical group and the Jiangxi Copper Company secured the rights to Mes Aynak, which is home to one of the largest copper deposits in the world. Mining supply quickly came to a halt after discovering copper deposits were located beneath a UNESCO-protected heritage site and remain in limbo to this day.

A 2019 report from the Afghan Ministry of Mines and Petroleum estimates the country’s copper deposits at 30 million tonnes. An Afghan mining report shared by the ministry describes an additional 28.5 million tonnes of copper in undiscovered deposits, bringing the total to 60 million tonnes, valued at hundreds of billions of dollars.

Other challenges include logistics. Afghanistan does not have access to water and has a limited rail network. Some mineral extractions require advanced technology and equally sophisticated infrastructure, which means that a 2010 US Department of Defense report describing Afghanistan as “Saudi Arabia of lithium” may be bogus.

Lithium is experiencing a global shortage as demand for the precious metal increases globally, especially with the rise of electric cars, which primarily depend on high-quality lithium for their batteries.

More recent reports are vague as to the amount of lithium actually present in the country. A 2018 report from the US Geological Survey reports that Afghanistan has significant deposits of minerals containing lithium, but makes no estimate of how much can actually be found. A joint US-Afghan assessment in 2019 does not discuss lithium at all, even though it does report 1.4 million tonnes of rare earth metals.

The same report describes more than 2.2 billion tonnes of crude iron ore, a precursor to steel valued at over $ 350 billion, in addition to a much smaller gold deposit estimated at 2,700 kg. , valued at $ 170 million.

Similar to neighboring Iran and Turkmenistan, Afghanistan is also estimated to have nearly 1.6 billion barrels of crude oil and 16 trillion cubic feet of natural gas.

Amidst all the mineral and petroleum riches lie much in demand resources necessary for modern green technology. While the United States, Europe and Japan see Afghanistan as an opportunity to reduce reliance on Chinese rare earths, the maneuver would require years and millions of dollars in spending.

While Afghanistan is hailed as a super-mineral reserve, the costs of mining, production and shipping are rarely cited, giving a totally inaccurate picture of the country’s mineral wealth.