China, India and Turkey to siphon more Russian oil ahead of EU ban

DUBAI/TOKYO — China and India continue to increase their imports of Russian oil as part of a dramatic overhaul in global energy trade, according to the latest industry data. But Asia’s ability to absorb more production will be tested as the European Union cuts imports from Russia in response to Ukraine’s invasion.

Between the start of the war on February 24 and June 2, a total of 290 tankers left Russia for Asia, according to a Nikkei Asia analysis of Refinitiv data. That’s up from 190 at the same time last year.

Meanwhile, the EU has increased its oil imports from other sources, including West Africa and the Middle East, a harbinger of the change its 27 member countries must operate later. This year. The EU agreed last month to ban imports of Russian oil by sea from the end of this year to increase financial pressure on the Russian economy and President Vladimir Putin. The biggest EU countries have also agreed to stop importing from Russia by pipeline.

The rise in Asian imports reflects opportunistic purchases of Russian Urals crude which now trades below production elsewhere, such as Brent crude from the North Sea. However, with high oil prices everywhere since the invasion, a barrel of Urals crude was recently selling for around $95, the same price as on February 24.

“While the price of Russian crude has been reduced somewhat, crude oil transportation through Russia has not been significantly damaged,” said Tomomichi Akuta, senior economist at Mitsubishi UFJ Research & Consulting. “Russia continues to derive some level of oil revenue.”

China imported 1.09 million barrels per day from Russia by sea in May, according to Kpler, a commodities research firm, while India imported 740,000 barrels. It was a significant increase from 910,000 and 284,000 barrels, respectively, in April, when the two countries jumped to take advantage of the discount. Averages for 2021 as a whole were 725,000 barrels per day for China and just 36,000 for India.

Giovanni Stanouvo, commodity analyst at UBS, predicted that India, China and Turkey will continue to buy Russian crude, given the steep price discounts. But Tatsufumi Okoshi, senior economist at Nomura Securities, is skeptical that China and India can significantly increase their oil purchases from Russia from the current level.

“India and China have long-term oil purchase contracts with their oil suppliers in the Middle East,” Okoshi told Nikkei Asia. “Their basic position is to buy cheap Russian oil on the spot market when it suits them. I don’t think they will abandon the Middle East and buy a large amount of Russian oil.” 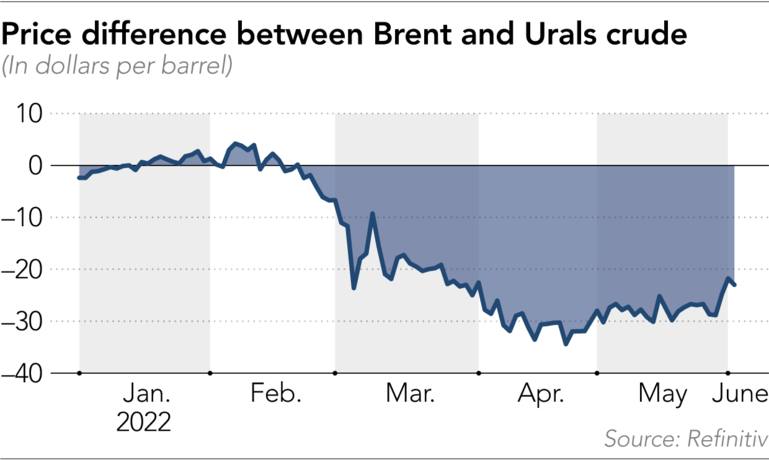 In addition to planning to reduce its own purchases of Russian oil, the EU aims to make it harder for alternative buyers to step in. It banned European insurers from covering ships carrying Russian oil – a ban that the Financial Times and others have reported could also be adopted by the UK, home to insurance market Lloyd’s of London.

Lloyd’s of London did not respond to Nikkei Asia’s request for comment.

“Redirecting Russian natural gas to Asia from Europe would require the construction of extremely long pipelines or specialized ports like the one on the Russian island of Sakhalin,” he said. “Sending oil to Asia would require shipping, but due to war-related sanctions in Ukraine, insurers are refusing to cover tankers with Russian cargoes. Banks are refusing to lend money during the time that the oil is in transit. So the oil companies in countries like India have demanded huge price discounts to cover the additional costs and risks.”

While the effect of European restrictions will become more visible in the coming months, the war has already caused some changes in the composition of imports to the EU, and differences have emerged between countries in the bloc.

EU imports increased from West Africa – led by Angola, Nigeria, Cameroon and Gabon – the United States and the Middle East, notably Iraq and Saudi Arabia. Crude from the Urals that still arrives in Europe more often goes to the Mediterranean, with Italy taking proportionately more than the countries of northwestern Europe. 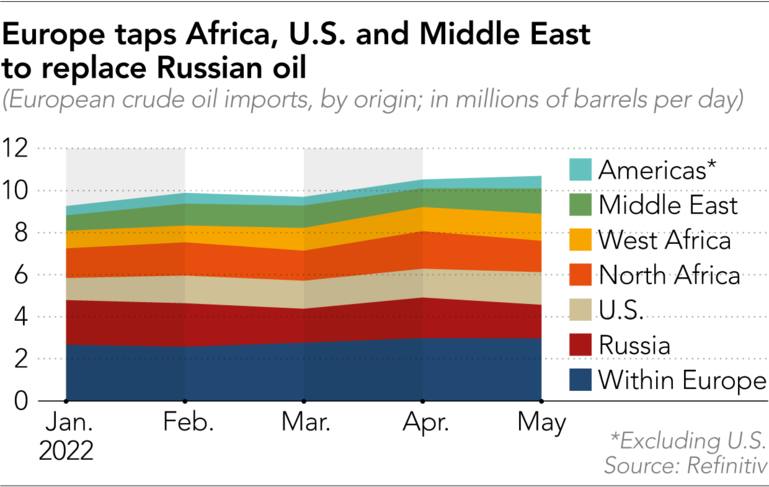 Since many European refiners are set up to process Urals crude, the most similar substitutes would come from Saudi Arabia and Iraq. That could expand the market for Middle Eastern crude as Asian refiners, some of its biggest buyers, buy more from Russia.

Shukri told Nikkei Asia that “in the short term, Middle Eastern producers such as Saudi Arabia, the United Arab Emirates and Iraq will not want to destabilize their OPEC relations with Russia, but to medium and long term, they would be ready to pump more oil to Europe.

Sultan Al Jaber, managing director of UAE state-owned energy company ADNOC, told Nikkei Asia: “We are expanding our crude oil production capacity to 5 million barrels per day by 2030 or earlier and we are exploring the possibility of pushing it higher”.

China’s imports from another source, the Atlantic Basin, have fallen as its purchases from Russia have increased. Specifically, West African shipments to China in April averaged 429,000 barrels per day, according to a preliminary estimate by Kpler, the lowest in more than five years. The average in 2021 was 1.15 million barrels.

Dmitry Marinchenko, senior director at Fitch Ratings, said they were already operating at full capacity. “They would need more investment and more drilling,” he told Nikkei Asia. “The only two countries that have material spare capacity are Saudi Arabia and the United Arab Emirates.”

While China and India may suck up most of Russia’s crude, they might not absorb all of the production the country currently sends to Europe, Marinchenko said.

“Two to three million barrels a day of Russian oil could disappear from the market by the end of the year, because it will be lost and go nowhere,” he said. “More and more customers are boycotting Russian crude, and EU sanctions will lead to logistical bottlenecks and a lack of access to Western technologies needed to lower Russia’s oil capacity.”

Turkey goes even further in the fight against climate change

Greece wants to keep the channel open to Turkey -PM